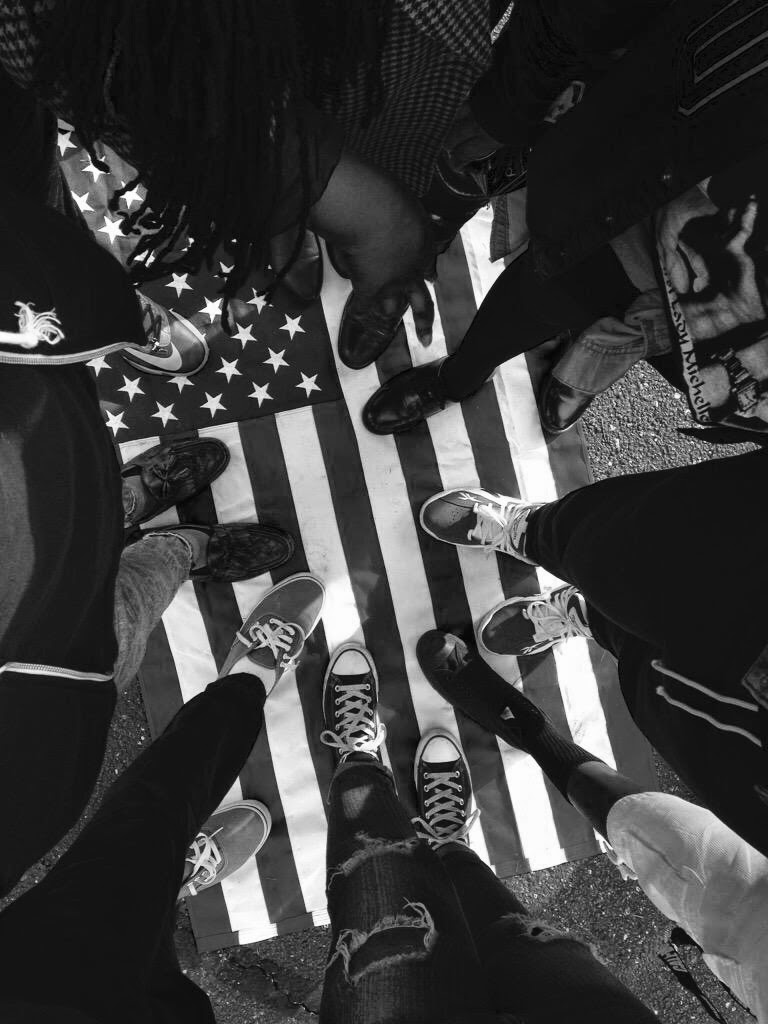 What people tend to overlook is the passion young people have. The hunger for knowledge. The fearlessness. The willingness to start a fire.

All it takes is one spark to set a campus ablaze.

For Wright State University, that spark turned to flame on April 24.

I sat with students and concerned citizens Tommy DiMassimo, Will Kellum, and Jordan Ross, to discuss the issues and mainly, to listen.

When these students and others decided to exercise their First Amendment right to Freedom of Speech, they set out with a very clear goal: stand in solidarity with Eric Sheppard (if you don't know, read up) and ultimately contribute to the dismantling of white supremacy.

The students went to the campus's center with a desire to begin an important and necessary dialogue. They displayed their ideas on a sign which read,
"I STAND...
The protest began with students only holding the sign. When they recognized the lack of interest from their peers, they decided to actually stand on an American flag, as Eric Sheppard, Valdosta State University, did and is now being persecuted for--a statement that definitely brought attention to the stance.

Unfortunately, the attention was not geared toward the unjust oppression of Freedom of Speech, the "rampancy of racism," or the frequent loss of black lives, but to the flag. Not the human beings, the stars and stripes. This was not only a disappointment to the protesters but a shameful display of insensitivity and lack of humanity.

"This is not the tragedy. They'll make more flags. It's not that easy to make more black people," DiMassimo expressed.

Once students noticed the protesters standing on the flag, many were angered. "Nigger" was spat out, a protester was threatened to be lynched, and another was told he would be "put in a coffin with a flag draped over it." These threats were dished out both in person and online. Other messages included "if you don't like America, go back to where you came from" and "get out of my college, better yet, my fucking country."

Some called the protesters "terrorists," to which Kellum responded, "we are terrorists to the white privilege system".

Of course, the local news covered the protest. And our media outlets never fail to let us down. Instead of defending the Constitutional rights to speech and protest, bringing the issue of racism and white supremacy to light, or even condemning threats and promises of physical violence, they painted the protesters as the problem. The "angry" protesters "disrespected" and "threw down" the flag. The story became about the (white, as they only interviewed white students) bystanders' discomfort, instead of the dead, or soon to be dead, (black) men the protesters were fighting for.

The problem is, you can yell "black lives matter" and no one will even look your way. But if you whisper it while upon a flag, they'll pay attention. Not to the issue that matters to you, but to the piece of cloth beneath your feet. Flags matter to people. Black lives don't. The responses and threats the protesters received prove that to be true.

Imagine a nation in which citizens cared about black people as much as they cared about the flag.

Although it is understood that the flag is often a symbol for freedom (for white people), it must also be understood that the same flag is, ironically, a symbol for oppression. A powerful and deadly force exists in this nation "under God" that is too often ignored. The systematic oppression in America is what allows institutionalized racism, police brutality, economic apartheid, racial profiling, etc. to plague the lives of citizens of color every day. Standing on the flag is not standing on your idea of freedom, it is simply asking: "Freedom for who? Liberty and justice for all?" It is challenging the notion that a black Valdosta student can be hunted for expressing his basic, inalienable rights.

To those who disagree with this act and means of speaking out against injustice, ask yourself, would you be paying attention now if they hadn't stepped on that flag?

To those who believe there is a "better way" to get the point across, like singing Kumbaya and participating in group hugs, wake up. Love is necessary but action is what's effective. As DiMassimo said, "there's no thinking and loving your way out of racism."

And finally, to White America, still in denial of privilege, insistent on supremacy and blind to the bloodshed of fellow citizens-fellow human beings-, your burning will provide light and heat for the rest of us.

If I am to be completely honest, I must express that there is both fear and excitement in me as the flames continue to spread, not only through Fairborn, Ohio, but through the nation. People think of the word "fire" and fear the possible destruction. What they fail to realize is that fires often clear out the debris, allowing a healthier world to grow in its place. Fires will mean out with the old systems, old ideals, old institutions, and old power structures. In with the new. 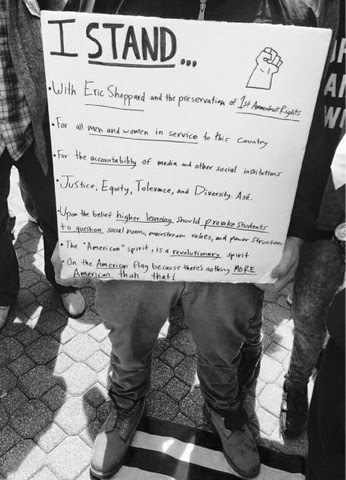 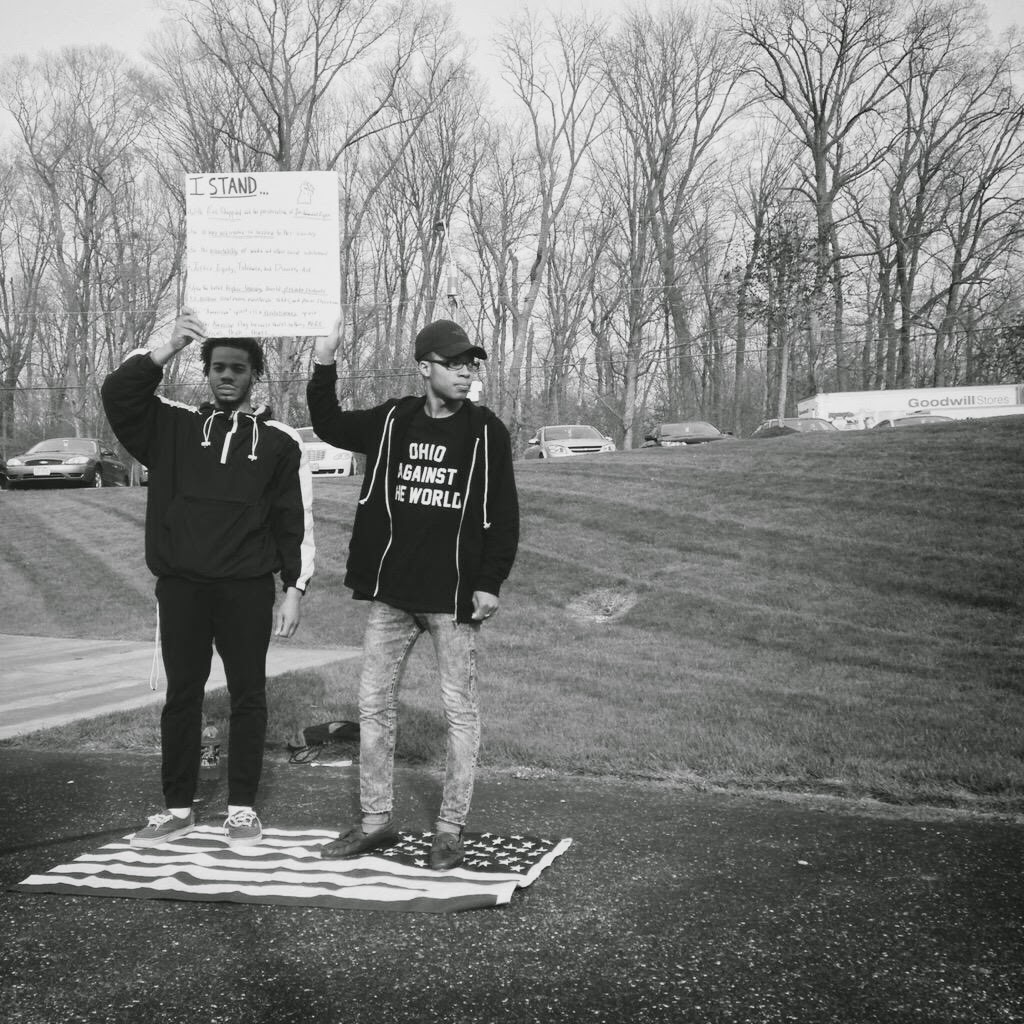 Jaylin Paschal is the founder and editor of INSIGHT Magazine. She also runs Creative Liberation, a personal blog where you can read through her rants and rambles. At school Jaylin is Editor-in-Chief of her school paper and an editor of the school's literary arts magazine. She spends her days writing and sleeping, or wishing she could write or sleep.
Posted by Jaylin Paschal at 5:02 AM