Why Your "Black on Black Crime" Argument is Irrelevant

by Jaylin Paschal
To first put the topic of discussion into context, let's say a white man shoots a black man. Perhaps because he was wearing a hood in the rain, or playing his music “too” loudly, or reaching for his wallet after being asked to provide identification, or maybe just for being black. Let's say the white man-police officer, neighborhood patrol, random civilian-isn't convicted, or even indicted, for the senseless murder. Let's say a “black lives matter” protest spreads nationwide, and people take to the streets outraged by the notion that you can kill a black man for virtually no reason and get away with it.


One of the first things (some) white people, or in some cases, black people, will say is “black men shoot black men all the time, and there are no protests.”


This statement is first offensive because it is inaccurate. Protests against black on black crime, gang violence, and gun violence occur on a daily basis. They receive less media attention, but there is still a movement. Countless programs exist that are dedicated to eliminating black on black crime, so if you don’t think we care, you’re not paying very much attention. We are upset over the loss of lives, and do not pardon the death of a black man as long as it is at the hands of another black man. In fact, that is when it is the most upsetting.

1. Although black on black crime does exist, it is not rampant as many believe. Black on black crime seems to occur much more frequently than it does due to the lack of a racial equivalent. Those who racialize crime, and throw staggering black on black crime statistics out there, never mention the crime happening between other races. The truth is, “black on black” crime happens about as frequently as white on white crime does. As stated in an Alternet article, “black criminals are not particularly different. America is very segregated, and its criminality conforms to that fact. So the victims of most crimes are the same race as those who commit them. Eighty-four percent of white people who are killed every year are killed by white people. White people who buy illegal drugs are most likely to buy them from white people. Far from being extraordinary, the fact that black criminals are most likely to commit crimes against black people makes them just like everybody else. A more honest term than “black-on-black” crime would be, simply, ‘crime’.” 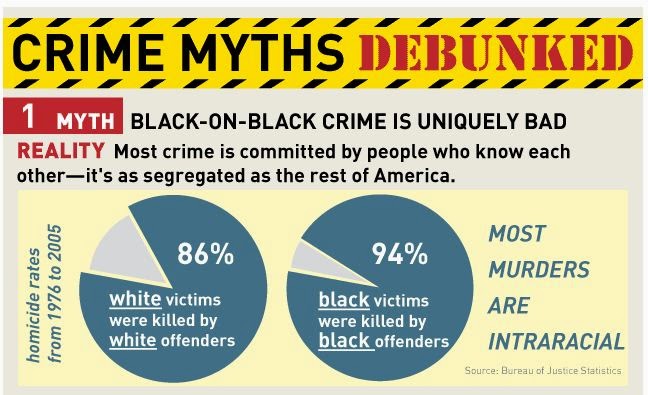 2. Yes, black men kill black men every day. The difference between a black murderer and a white murderer is that the black criminal is almost always convicted, where white people are let off. Even when white criminals are prosecuted, they tend to serve less jail time than they're black equivalents. Often white criminals are convicted for the "lighter" offenses, such as (involuntary) manslaughter, where black parallels are convicted of first degree murder, which leads to harsher sentencing. For example, a black kid steals rellos from the corner store. Killed in the street. White man shoots up a movie theater. Apprehended. At the end of the day, “Black Lives Matter” is addressing an unfair system that allows the murder of black men and thrives on the incarceration of other black men. Below is a chart of crime and punishment, specifically drug use, related to race. 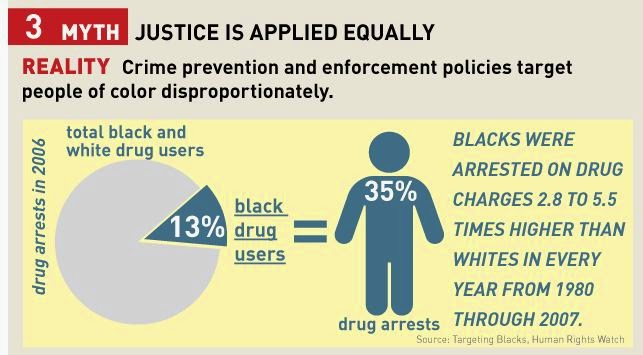 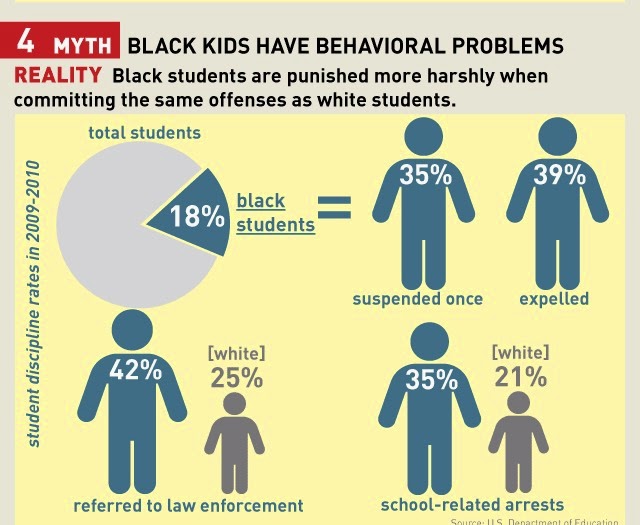 3. When relating this statement to police murders, Ta-Nehisi Cdates said it best: “To the extent that killings by the police generate more outrage, it is completely understandable. Police in America are granted a wide range of powers by the state including lethal force. With that power comes a special place of honor. When cops are killed the outrage is always different than when citizens are killed. Likewise when cops kill under questionable terms, more scrutiny follows directly from the logic of citizenship. Great power. Great responsibility.”


4. Many are under the impression that black men, especially young black men, are committing an insane amount of crimes. This is false, as stated in the chart below, but even if it were true it would make sense simply because of demographics and behavioral patterns.
Let me explain: Black men would be more easily involved in violence and crime due to circumstances and location. A link between poverty and crime has been made, proving that those who are poor are more likely to be involved in criminal activity. When you are living right at or below the poverty line, you are both more likely and more willing to go to extreme measures to make ends meet, even if said measures are illegal. Considering that America’s poorer neighborhoods are home to more minorities than white people (because of the economic and social disadvantages white supremacy and privilege put into place long ago), minorities are more likely to resort to crime for survival.

At this point in the argument, you may ask why those struggling to keep their heads above water do not resort to honest jobs. Most of them do. However, we are all aware that it is nearly impossible to survive off of minimum wage jobs. $8.10 is not enough to support one individual, and does not allow a family to even scrape by. Higher paying work options are often not available, as people living in these poorer neighborhoods struggle to put food on the table, let alone put themselves through college to obtain the degrees these careers require. And so when you can't afford school, and therefore can't get a good job, and therefore can't feed yourself or your family and improve your circumstances, you are not left with many options. It’s a vicious cycle, and crime is there staring you in the face.
This is not me justifying crime, simply analyzing a pattern. If more black men live in these circumstances than white men, more black men are going to be involved with crime than white men, and therefore black on black violence will result.
Referring to my first claim, there is a societal acceptance that the black man is violent and breaks laws on the regular. This acceptance stems from the historical figure of the "angry black man" and the negative portrayal of black people by the media (which I could write an entire article on, but I'll refrain because this already a bit lengthy), and leads to racial profiling, underlying fear (which leads to a lethal force when other means of apprehension could be used), unfair sentencing, and dangerous generalizations.

﻿
5. Injustice here does not pardon injustice there. It doesn’t matter if you feel like black people don’t get upset over “black on black” crime. Someone was still unjustly murdered. If people protest wrongful death, let them protest wrongful death. Protest with them. Do not shrug off injustice now because (you think) it was once shrugged off before.
If you somehow are indecent enough to be "annoyed" by the protest of wrongful death  happening without punishment, you're going to need a much better excuse for your inhumanity. Mentioning black on black crime is inaccurate, invalid, and irrelevant.


Jaylin Paschal is the founder and editor of INSIGHT Magazine. She also runs Creative Liberation, a personal blog where you can read through her rants and rambles. At school Jaylin is Editor-in-Chief of her school paper and an editor of the school's literary arts magazine. She spends her days writing and sleeping, or wishing she could write or sleep.
Posted by Jaylin Paschal at 6:33 PM